Dr. Martin Goch was born in Bielefeld in 1963 and studied History and English at the Ruhr-University Bochum and the University of Sheffield. In his dissertation, he analysed English post-war university novels. Goch started his professional career at the University of Essen (today University of Duisburg-Essen) in 1992, assisting the President as his Personal Advisor until 1996.

Two years later, in 1994, he took over additional team leading functions and later became Deputy Head of the Department of Student Affairs. From 1996 onwards and in parallel to these duties, he led the Department of Controlling & Cost Accounting.

In 2002 Dr. Martin Goch was appointed as Head of Finance at the University of Essen and later helped organise the university merger of Duisburg and Essen. In 2009 he transferred to Rhein-Waal University of Applied Sciences as their founding Vice President of Finance and Human Resources.

In February 2014 Martin Goch became Chancellor at Heinrich-Heine-University Düsseldorf and heads the Central University Administration today. He is also a member of the University's President's Office. 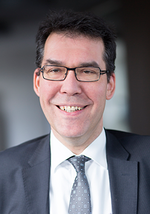